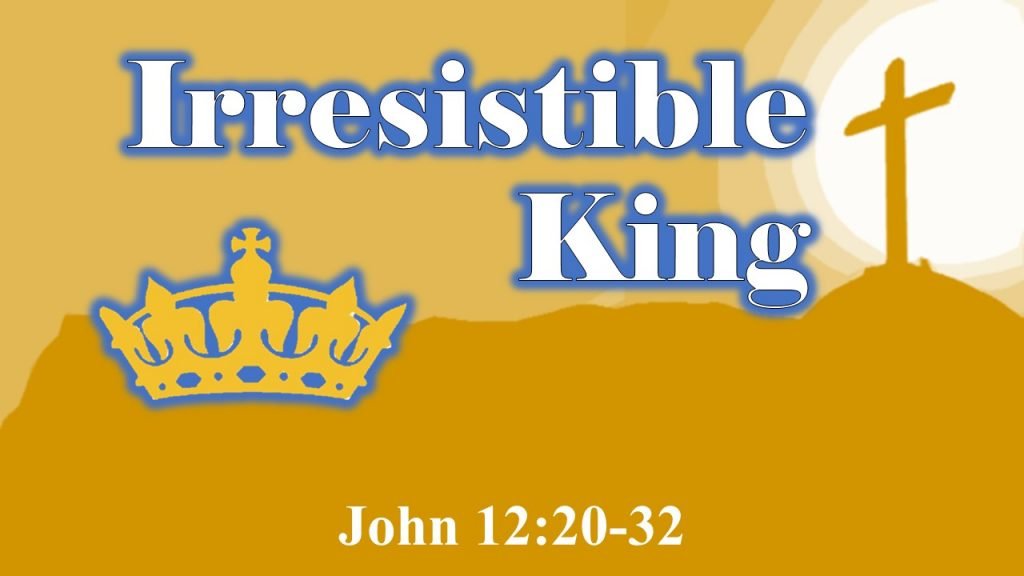 Today is the anniversary of the day that Jesus Christ walked out of the grave, fully alive, after being crucified under the Roman authority, Pontius Pilate. The historical account of Jesus’ resurrection from the grave is undeniable.

A Roman Centurion ensured Jesus died on the cross. That Friday evening, Jesus is buried in a sealed tomb with guards standing watch.
The following Sunday, the grave was empty. Historical records account for hundreds of witnesses that see Jesus alive after His resurrection. Today we celebrate a King who is risen from the dead. To those that know Jesus, He is the irresistible King of kings.
Ask yourself, “Am I drawn to the irresistible King? When I hear of Him, do I fly to Him like a moth to a flame? Do my affections entice me to Him as a deer pants for the water? Is He a pearl of great price?”

There is no greater King. Jesus is King of all kings and Lord of all lords. Jesus is worthy of our complete allegiance. He reigns supreme.
Jesus is God the Son who empties Himself of His divine privileges. He steps down from His throne in heaven, is made in the likeness of men, and He becomes a bond-servant. He humbles Himself by becoming obedient to God the Father. He willingly is crucified.

Because of Jesus’ obedience to die for our sins, God the Father has highly exalted Him and made His name as the one which is above every name. At the name of Jesus, EVERY KNEE WILL BOW, in heaven, on earth, and under the earth, and every tongue will confess that Jesus Christ is King of all kings (Philippians 2:6-11). Jesus is alive, risen, and seated in the heavenly places. Jesus walks out of the grave, ascends into heaven, and sits on His throne.

John writes His Gospel so that we might know Jesus. John wants us to know that Jesus is a victorious King who draws people of all nations to His eternal Kingdom. He is an irresistible King.

This morning, allow your heart to be drawn to worship Jesus, the irresistible King.

The first characteristic that makes Jesus irresistible is that He is not a king for some, but King for all the nations.

During Jesus’ final week in Jerusalem, crowds press in to see Jesus. His disciples work as bodyguards. Philip of Bethsaida has Greeks inquire of Jesus. What makes this interesting is that they are not Jews. These Greeks are gentiles who have come to Jerusalem for the Passover celebration. In Jesus’ time, the number of gentile proselytes who come to worship during the feast increases.

The Greeks are drawn to Jesus and want an audience with Him. Philip tells Andrew about the Greeks, and both Andrew and Philip proceed to the center of the crowd to tell Jesus the Greeks want to see Him.

Jesus’ response is curious. He doesn’t say bring them to me or keep them away. Instead, He says, “The hour has come for the Son of Man to be glorified” (John 12:23). When Jesus says, “hour,” He is using an idiom to express that the time is near.

Jesus has eyes to see what is taking place in the spiritual realm. Jesus gives Himself the title, Son of Man. The Son of Man is an eschatological figure. He is the King that receives authority from God to rule over every person of every tribe, language, and nation. All people will gladly serve the Son of Man. His kingdom is an everlasting dominion that will not pass away. (Daniel 7:13-14)

Jesus is the irresistible King because He is a King for everyone. He is a King for those who speak English, Telegu, or Khoza. In His kingdom, we turn swords into plowshares, for there are no borders to protect. There is no strife, no war, and no armies. Children will wander freely without danger or threat. There are no hospitals because there is no disease or sickness. Even the animals serve Jesus. The lion and the oxen eat straw together in the field as the wolf lies down with the lamb.

Jesus is the irresistible King of the nations. Is your heart drawn to Him?

When our hearts are drawn irresistibly to Jesus, we are willing to forsake everything to serve Him as King.

Jesus describes the willingness of His servants to forsake everything to serve Him with perfect allegiance. After telling His disciples that the hour for His Kingdom is near, Jesus gives an analogy of a grain of wheat. Just as the grain of wheat first dies before it sprouts into a fruit-bearing plant, He must die. He will be sown into the earth but will walk out of the grave, bringing the fruit of eternal life to all who put their faith in Him.

Jesus expects those who serve Him to be like the grain of wheat. Throughout His ministry, Jesus expresses the sacrifice He expects of His servants. Before the Transfiguration, Jesus said, “And he who does not take his cross and follow after Me is not worthy of Me. He who has found his life will lose it, and he who has lost his life for My sake will find it” (Matthew 10:38-39). After the Transfiguration, He told His disciples that if anyone is to come after Him, they must deny themselves, pick up their cross daily, and follow Him (Luke 9:23).
Serving in Jesus’ Kingdom requires dying to self. More specifically, His servants must be willing to die by forsaking this world. If we are unwilling to let go of this world, we will not bear fruit for Jesus.

Faith in Jesus produces satisfaction in Him. He is the Pearl of great price. The Bible says that everyone serves a master. Either we serve the master of this world, or we serve Jesus. We cannot serve both. The choice is a stark love-hate relationship. We must love serving one master while we hate the other. There is no middle ground.

The servants of Jesus die to this world, and a transfer takes place. It is a transfer of kingdoms. They leave the kingdom of darkness and enter Jesus’ kingdom of light. The kingdom of darkness is full of sin and death. The kingdom of light is holy and has life everlasting.
To those who serve Jesus, the riches of this world become wood, hay, and stubble. They gladly die to this world so they may gain Christ. Jesus promises His unwavering companionship to His servants (verse 26). Wherever the servants of King Jesus go, Jesus goes with them. He will never leave or forsake those who serve Him.

Jesus said, “If anyone serves Me, the Father will honor them” (John 12:26). There is no greater reward than being honored by God the Father. He shines His face upon us.

Jesus is irresistible; there is nothing in this world that compares to Him.

As Jesus thinks about His Kingdom and the time becoming closer, He is struck by what must take place before He sits on the throne. Jesus must be the grain of wheat that dies. He knows His death will be an excruciating crucifixion.

Contemplating death brings trouble to Jesus’ soul. He has a choice. He may ask God to save Him from death, or He may go forward and fulfill His ministry purpose. It is days before His crucifixion when Jesus will suffer the full wrath of God. He says, “Now My soul has become troubled; and what shall I say, ‘Father, save Me from this hour’?”

No. Jesus will not ask God the Father to spare Him from death. He knows His purpose is to save sinners from the wrath of God. It is an agonizing reality.

The trouble in Jesus’ soul will resurface when praying before His betrayal. On that night, His soul is troubled to the point that He sweats drops of blood. Then, as He does in this passage, Jesus chooses to obey the will of the Father and willingly face a horrific death.
Jesus values God’s glory more than His life. He prays to God the Father, asking, “Father, glorify Your name.”

At Jesus’ baptism, God speaks from heaven, saying, “You are My beloved Son, in You I am well-pleased.” (Luke 3:22). On the Mount of Transfiguration, God says, “This is My Son, My Chosen One; listen to Him!” (Luke 9:35). For the third time in Jesus’ life, God the Father speaks from heaven. “I have both glorified it and will glorify it again.”

The voice was loud; people who heard it thought it had thundered. Others said. “An angel has spoken to Him.”

Jesus tells them the voice they heard was not for Him, but those present. God wants everyone to know that He will glorify His name through Jesus.

Jesus asks God to glorify His name. The glory of God is expressed beautifully in Exodus 34. When Moses asks to see God’s glory, God responds. God passes in front of Moses and proclaims,

“The LORD, the LORD God, compassionate and gracious, slow to anger, and abounding in lovingkindness and truth; who keeps lovingkindness for thousands, who forgives iniquity, transgression and sin; yet He will by no means leave the guilty unpunished, visiting the iniquity of fathers on the children and on the grandchildren to the third and fourth generations.” (Exodus 34:6-7)

God is glorious two ways. He is glorious because He extends grace and forgiveness to sinners who put their faith in Jesus. And, God is glorious in punishing the guilty who are unwilling to serve Jesus as Savior and Lord.

The glory of Jesus and the glory of God are the same. John writes at the beginning of the Gospel, “And the Word became flesh, and dwelt among us, and we saw His glory, glory as of the only begotten from the Father, full of grace and truth” (John 1:14). The death of Jesus Christ fulfills the glory of God. When we see Jesus on the cross, we behold God’s glory.

Jesus is the irresistible King of glory.

The death on the cross does much more than save sinners. When Jesus suffers and dies on the cross, He fights a battle in the spiritual realm. Jesus tells His disciples, “Now judgment is upon this world; now the ruler of this world will be cast out.”

Jesus is the King who fights our enemies and is triumphant. Jesus cancels our debt of sin. He nails our sin to the cross. As He does, He disarms the rulers and authorities of evil and makes a public display of them, triumphing over them (Colossians 2:14-15).

Jesus is the triumphant King who rises from the grave to sit on the throne of David. He triumphs over Hades, and His flesh does not suffer decay. His victory over death makes His enemies a footstool as He sits at the exalted right hand of God. (Acts 2:30-35)

When we put our faith in Jesus and let go of this world to serve Him, we partake in His victory. We overwhelmingly conquer through Him who loves us. We may claim the promises of God which say that neither death, nor life, nor angels, nor principalities, nor things present, nor things to come, nor powers, nor height, nor depth, nor any other created thing, can separate us from the love of God, which is in Christ Jesus our Lord. (Romans 8:37-39)

Jesus is the Triumphant King who walks out of the grave, conquering sin and death. He freely shares His inheritance to everyone in His kingdom. We receive all the blessings of heaven as we rejoice in liberty, peace, comfort, complete satisfaction, and the eternal life He secures.

BE DRAWN TO THE SON OF MAN

Jesus is lifted up from the earth. Is He drawing you? Be drawn to the Son of Man, the irresistible King.