Death of a King – Good Friday 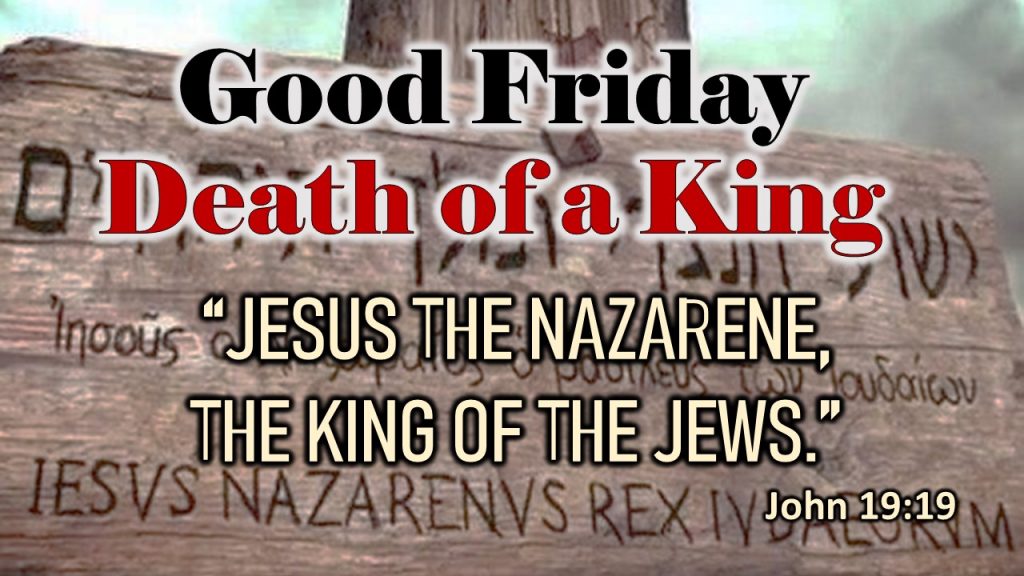 Death of a King

Good Friday is about the death of a King.

On His journey to Jerusalem in the final weeks of His life, Jesus tells His disciples that He, the Son of Man, will be delivered to the chief priests and the scribes. They will condemn Him to death and hand Him over to the Romans, who will crucify Him. (Mark 10:33-34)

It happens just as Jesus predicts. The chief priests condemn Jesus for claiming to be the King described in Daniel’s prophecy (Daniel 7:13-14). Jesus says He is the Son of Man, given dominion, glory, and an everlasting kingdom. He is the King who will sit on David’s throne, ruling people of every nation and language in an everlasting kingdom. In the ears of the chief priests and scribes, Jesus’ claim to be the Son of Man is blasphemy.

Without a fair trial, the following morning, Friday, a council of Jewish leaders hand Jesus over to Pilate to be crucified. He is given to Pilate because Jesus claims of being King are unlawful according to Roman law.

Pilate questions Jesus, “Are You the King of the Jews?” Jesus answers, “It is as you say” (Mark 15:2). Jesus undergoes mocking by soldiers who say, “Hail, King of the Jews.” They nailed Jesus to a cross. An inscription is fastened above Jesus. It reads, “JESUS THE NAZARENE, THE KING OF THE JEWS.” While on the cross, people make King jokes at Him.

The King’s crucifixion begins around 9:00 am, which is the third hour according to the Roman expression of time. Jesus will suffer for six hours before finally dying.

As we gather on the anniversary of His death, let’s look at the words the King of the Jews utters from the cross. What He says in the final six hours of His life is very revealing.

Worship the King who fights sin with forgiveness.

The first sentence the King utters after being nailed to the cross is astounding.

What do we say to those who falsely accuse us? None of us respond well to people hurling insults in our direction. Here is The King of the Universe scourged back scrapes against the wood of a tree He created. His hands and feet are held to the cross by spikes made of metal He created. A crown of thorns He planted pierces His skull, and the blood drips down His face.

The King speaks, but His words are not in retaliation against those who treat Him unjustly. His holiness runs deep. He radiates forgiveness and mercy. The righteousness and holiness of this King are beyond the scope of our comprehension.

The King is fighting a battle in the spiritual realm. He wields a sword of forgiveness and mercy to slay the evil of sin. Jesus’ fight is courageous and supernatural.

Worship the King of forgiveness and mercy.

Worship the King who loves His Mother

Between the hours of nine and noon, The King utters more words. He looks into the crowd and sees His mother. Theologians believe Mary’s husband, Joseph, has died, leaving Jesus the responsibility to care for His mother. He doesn’t think of Himself but thinks of her. He sees the Apostle John standing near His mom.

With these words, King Jesus ensures His mom is cared for by John, and from that moment on, John fulfills Jesus’ request.

The King, in His death, fulfills His responsibilities to those who He loves. He thinks of His mom. Worship the King who lovingly cares for His mother.

Worship the King who seeks to save sinners

Alongside King Jesus is a man who repents. He is a thief on the cross. The King does not forget His ministry purpose. Even under complete duress, pain, and suffering, Jesus saves sinners. He is come to seek and to save the lost.

Jesus is an amazing King. He never loses sight of the battle to save souls. His circumstances are life-ending, and He grants eternal life to a man whose only hope is grace and mercy. Jesus’ mission is to lavish grace upon undeserving sinners. The thief on the cross receives eternal life because he repents and puts his faith in the One crucified beside him. The thief reads the inscription, King of the Jews, and believes it to be true.

The day reaches the sixth hour of the Roman clock, which is noon, according to our tracking of time. Darkness covers Jerusalem like a blanket. It will stay dark until King Jesus dies three hours later.

Worship The King who finishes His Work

With three hours left, the pain reaching an excruciating level, the King knows His work is not yet complete. There is more of the Father’s plan yet to take place. Jesus is thirsty. His tongue cleaves to His jaw as Psalm 22 prophecies. To fulfill the Scripture, Jesus cries out.

At the foot of the cross is sour wine. Those standing by hear His cry, and they take a sponge full of the sour wine and bring it up to His mouth.

The prophecy is finished. One more item on the long list of signs to identify Jesus as our gift from God is complete. The King is willing to drink sour wine to let us know He is the Messiah. Under great pain, nearing death, He finishes His work. His concern is to honor God’s Word. His concern is the revelation of truth.

Worship The King who is forsaken on our Behalf

It is the ninth hour. In these final moments of life, the King cries out in a loud voice.

The words are partly Hebrew and partly Chaldee. The English translation is, “MY GOD, MY GOD, WHY HAVE YOU FORSAKEN ME?” The words are the first verse of Psalm 22, a Messianic Psalm.

King Jesus’ soul is suffering more than any of us will ever imagine. He is experiencing the divine wrath of God. He is drinking the cup of God’s divine wrath all the way to the dregs.

God turns His face away and forsakes the King. Jesus experiences the punishment He does not deserve. He is forsaken on our behalf. Jesus is a King upon the battle-field who stands in the way and shields us from pain and suffering. We are bystanders who watch as He dies. He is wounded for our transgressions and bruised for our iniquities. The punishment for our sin falls upon Him.

Worship the King who is forsaken on our behalf.

Worship The King who trusts God; He has faith

The King heroically musters His final bit of strength to make His last cry by quoting Psalm 31:5 loudly.

Jesus is the author and finisher of our faith. In His death, He has faith in His Father. The King is a worshipper who trusts God to take His spirit. Our prayer is that our final words echo our King. “Into Your hands, I commit my spirit.”

Having said this, The King breathes His last breath. In the ninth hour, 3:00 pm, six hours after being nailed to the cross, Jesus of Nazareth, King of the Jews, dies. The battle ends with our sins cloaking His dead body. God is pleased because our salvation is secure.

Let these final words of our King give us great faith in Him. Jesus is the King of glory, mighty in battle.