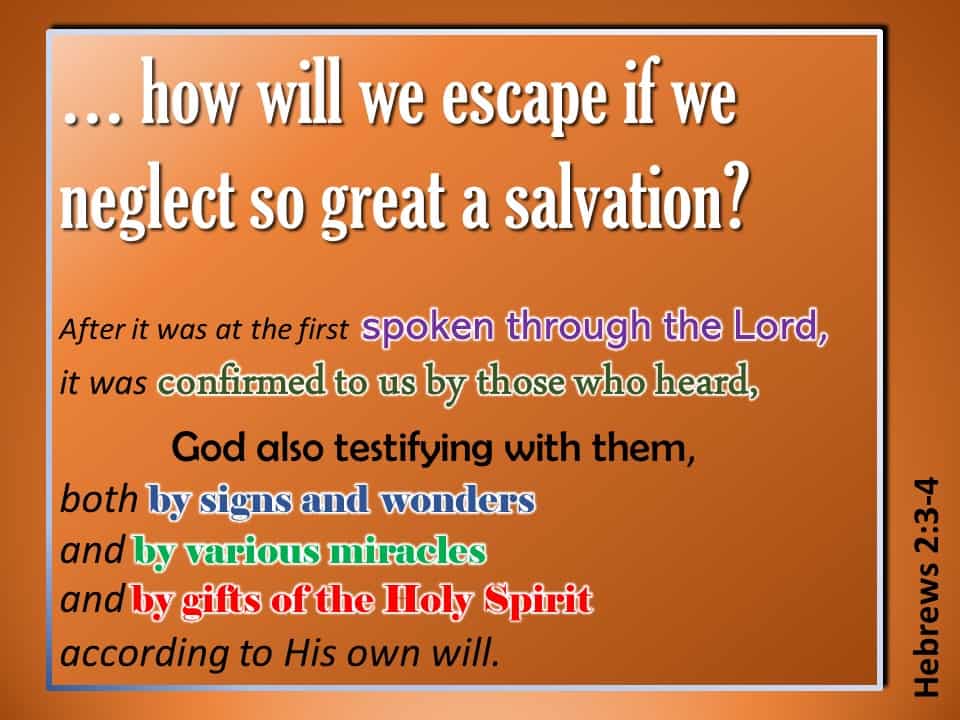 Main Idea: Do not neglect what you have heard about Jesus Christ

Warfare within the mind

This is how it looked in my life:

I am most intimate with my own experience. I know many people talk about the immense joy one has when they embrace Jesus as their Lord and Savior. This wasn't my experience to begin with.

What characterized my life with God at the beginning was a strong sense of performance and how far I fell short. I was in the mindset to get things right the first time with no wiggle room for failure or else. This was accompanied by an understanding that I could not meet the standard I was striving for. This resulted in much stress, anxiety, and depression.

Performance, the standard of perfection, the consequences of disobedience, began to be the major voice that I was listening to. This was constant record that was playing repeatedly in my mind.

The question I kept asking myself was, “how could I be a Christian if I have so much sin in me?”

Fear gripped me as I knew I didn’t meet the standard. I loved reading the Bible but commands like don’t lust, don’t get angry, honor your father and mother, love you wife as Christ loved the church became more rules that drove a deeper sense of fear in me.

The yoke is easy, and the burden is light was a farce to me. This Christianity thing was more about fear, anxiety, and depression than love, joy, peace, patience, and kindness. Who would want to subject themselves to this yoke of slavery. To the bondage of fear! I was trying to get away from fear, but it just got worse.

The standards of obedience to the Lord was just overwhelming and life didn't have much purpose at all other than, be obedient or die.

The command to share the gospel became another whip of fear for myself! I shared the gospel more out of fear of getting in trouble.

Because of this mentality I was living in, which was largely performance based and self-driven, I was very judgmental. My focus was on my performance, so my focus of others became about their performance.

For some, I envied. They seemed to have it together. They were tithing, raising their kids in a Godly way, and loving their spouses correctly. These people were the untouchables. I would feel a sense of shame because I didn’t even meet their standards.

There wasn't much I was going to share with them for fear of rejection or fear of being disciplined. Thoughts of discipline for a fear motivated rule follower is not good.

For others, my thoughts of their obedience and their lack of performance was judgmental. They must be going to hell because they don’t act like a Christian.

To be honest, fear is not a bad thing. Especially if it is tied with love but my fear was unhealthy. My fear was tied to my performance and my inability to follow the rules perfectly.

I don't know how many times in those early years I just wanted to walk away but something held onto me. Rather, someone held onto me.

Bad thinking usually is a result of terrible listening. By default, I am not a good listener, but I have learned through my experience to slow down and listen more productively. Especially to the words of a tender and compassionate Father whose priority is to love me unconditionally through Jesus.

The gospel may be proclaimed in its clearest sense but if a person or a group of people are not embracing the truth of God's grace through Jesus Christ, then bad things can happen like a rule following Christianity motivated by unhealthy fear.

This is what I believe was happening to these first century Christian this letter was written to. They heard the gospel of Jesus, embraced it, and then began to stop listening to the truth of grace and started to listen to the lies of rule following to be a Christian.

Like me, the lie of performance was largely winning out over the truth of grace in Christ. This was the battle of their lives and it is the battle of our lives.

The writer addresses a few things and gives many warnings that help us understand what they may have been listening to and drifting away from.

Hebrews 2:1-4 is the first warning about falling away from the unconditional love of God through Jesus.

1For this reason we must pay much closer attention to what we have heard, so that we do not drift away from it. 2For if the word spoken through angels proved unalterable, and every transgression and disobedience received a just penalty, 3how will we escape if we neglect so great a salvation? After it was at the first spoken through the Lord, it was confirmed to us by those who heard, 4God also testifying with them, both by signs and wonders and by various miracles and by gifts of the Holy Spirit according to His own will.

we must pay much closer attention to what we have heard, so that we do not drift away from it.

For if the word spoken through angels proved unalterable, and every transgression and disobedience received a just penalty, 3how will we escape if we neglect so great a salvation?

3how will we escape if we neglect so great a salvation? – centerpiece of the text

After it was at the first spoken through the Lord, it was confirmed to us by those who heard 4God also testifying with them, both by signs and wonders and by various miracles and by gifts of the Holy Spirit according to His own will.

Conclusion – The only performance that matters is that of Jesus Christ! This is a warning not to add anything to what Jesus has done or the Gospel of Grace becomes impure.

How can we relate today?

In my testimony at the beginning, how many times did you hear about the total grace of God through Jesus Christ?

Answer: none – it was all about me, my performance, and the rules I set for myself.

We can very easily adopt a performance-based attitude without even knowing it.

Ezekial 36:26 says, "Moreover, I will give you a new heart and put a new spirit within you; and I will remove the heart of stone from your flesh and give you a heart of flesh."

Basically, God is removing a cold-hearted, rule following, self-absorbed heart, from an individual and replacing it with a heart of compassion for others just like God did for us in Jesus.

The rules we adopt today may not be like they were when this letter was written.

The battle is to believe in grace.

The battle is to rest in the total grace of God through Jesus Christ and nothing else.