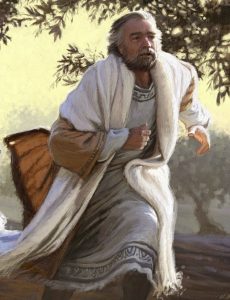 “So he got up and came to his father. But while he was still a long way off, his father saw him and felt compassion for him, and ran and embraced him and kissed him. And the son said to him, ‘Father, I have sinned against heaven and in your sight; I am no longer worthy to be called your son.’ But the father said to his slaves, ‘Quickly bring out the best robe and put it on him, and put a ring on his hand and sandals on his feet; and bring the fattened calf, kill it, and let us eat and celebrate; for this son of mine was dead and has come to life again; he was lost and has been found.’ And they began to celebrate.”

What do you see when you think of the face of God? Within the minds of many Christians the face of God resembles a stern judge. You can picture this judge on his bench with his gavel and the book of life sitting before him. You may be picturing yourself standing before the bench as you plead your case. He may ask you, “Why should you be allowed into My heaven?” Your response, “I trust in the blood of Jesus.” He may, with reluctance, look at his book, find your name, and then with a heavy sigh say, “You may proceed.”

This understanding of the face of God is far from the truth and has led to grief in many lives of Christian brothers and sisters. Jesus gave us a parable in the prodigal son that highlights the Fathers reaction to repentant sinners. Understanding the true personality of God will relieve a lot of stress in our walks with the Lord.

A famine broke out in the story and he found himself feeding pigs for food. The temptation for him was to eat the same food that was given to the pigs because no one would feed him. This is when he came to his senses and understood that even his father’s hired hands are treated much better.

The prodigal then rehearses what he will say to his dad as he begins his journey back home. The parable tells us he was rehearsing to himself, “I will get up and go to my father, and will say to him, “Father, I have sinned against heaven, and in your sight; I am no longer worthy to be called your son; make me as one of your hired men.” This is the point in which many of us have gotten stuck. The prodigal begins rehearsing what he will say to his dad out of his repentant heart because he may be seeing the face of his father as one who would be reluctant in allowing him back. He might be thinking that he has no right in bringing him back into the family for what he did. His father was so gracious to him, how could he have screwed up so bad and how could he let him back into the family? He may have practiced the speech 1,000 times on his way home. What he didn’t realize is how much his father loved him.

The parable says, “But while he was still a long way off, his father saw him and felt compassion for him, and ran and embraced him and kissed him.” As the father was doing his chores or conducting his business from day to day his gaze was probably off in the horizon to hopefully catch a glimpse of his sons return. According to the older son, the family knew that he had spent his money on prostitutes. They must have been receiving news about him from an outside source. The father knew the son had soiled himself with worldly living but his love proved stronger than his son’s sin.

His felt compassion for the son drove him to run, embrace the son, and kiss him. Understanding a bit of the ancient world will tell you that fathers with dignity did not run. It was shameful for them as they would have to pull up their robes in order not to trip. This man seemed wealthy with a high reputation but out of compassion for his wayward son, was willing to suffer shame by running to him and meeting him.

This is where the father’s face shines forth towards his repentant son. He doesn’t even acknowledge what the son said but without hesitation embraced his son with hugs and kisses. The father restored him immediately to the family by placing a robe on him with a signet ring declaring that all he owned was his as it was before. He not only restored his position in the family but his inheritance as well. The father declared that they must throw a party in celebration of the new life of his son!

Jesus told parables with one specific point. The father was the main point in this parable. The father represents God our Father with the son representing us. If you truly feel remorse over offending such a loving God and have turned to Jesus as Lord and Savior, how does the face of God look to you? According to the parable He has nothing but compassion for you, has embraced you as His child in whom He is just as passionate about as He is of Jesus. Heaven has rejoiced over you because of the Fathers joy for you and the glory He receives. How does that change the image of the face of God for you?

This should bring warmth to our hearts, cause us to look at God in a loving way and propel us out of compassion to tell others of the great truth of God’s love for lost sinners! The face of God is one of love, joy, peace, patience, kindness, gentleness, goodness and self-control. Please, live under His constant mercy and compassion for you. He exercises His grace towards you moment by moment through Jesus Christ. There may even be tears of joy streaming down His face when a sinner returns to His embrace. We see His face most clearly in the person of His Son. May His Spirit change your understanding of His gaze on you and cause you to love Him more!