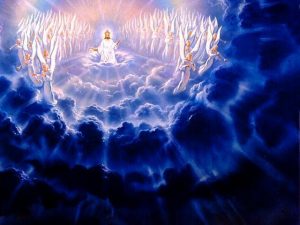 “And He is the radiance of His glory and the exact representation of His nature, and upholds all things by the word of His power. When He had made purification of sins, He sat down at the right hand of the Majesty on high, having become as much better than the angels, as He has inherited a more excellent name than they.”

Last week we asked the question, “what does God think when He thinks of Himself?” The answer we gave in its simplest form is Jesus. In Jesus we see the nature of God displayed perfectly. For us humans to understand the relationship between God and Jesus, the description of Son describes who Jesus is. It is even deeper than our human relationships between a human father and a human son. Jesus is God on display. Jesus is God speaking. Jesus is the truth of God. Simply put, Jesus is God.

There must have been within the congregation of Hebrews some talk about the worship of angels. The Lord did reveal Himself as, “the Angel of the Lord” in some passages in the Old Testament. There might have been some confusion there. The remainder of chapter one is the writer declaring what God the Father thinks of God the Son with the writer using God’s conversation about His Son to declare that Jesus is much better than the angels. The writer also gives us an explanation as to the true function of angels.

Angels are important but should never be exalted above Christ. There has been known to be angels-only boutiques, angel newsletters and magazines, angel seminars and college-level courses, angel T-shirts, calendars, postcards, sunglasses, jewelry, and an angel Broadway play back in the 90’s.

Hebrews 2:7 reads, “But we do see Him who was made for a little while lower than the angels, namely, Jesus, because of the suffering of death crowned with glory and honor, so that by the grace of God He might taste death for everyone.” In the humiliation of Christ, He was made for a time lower than angels. The angels came to minister to Jesus after the temptation in the wilderness – Matthew 4:11. For a time He needed the angels like we need the angels today. They came to nurse Him back to strength after fasting for 40 days in the wilderness while the devil tempted Him.

According to our verses this week, Jesus inherited a much better “name” than the angels. What was that name? Paul states in his letter to the Philippians that, “so that at the name of Jesus every knee will bow, of those who are in heaven and on earth and under the earth, and that every tongue will confess that Jesus Christ is Lord, to the glory of God the Father – Philippians 2:10-11.” When we see Jesus we will confess Him as Lord. We will see Him visibly and declare Him to be who He is, God. According to the writer of Hebrews, God the Father makes the same declaration from His perspective to God the Son in verse 5 of chapter 1, “You are My Son, Today I have begotten you.” The name declared by the Father is Son. When we declare Jesus as Lord we are in agreement with God the Father. When we declare Him as Lord we are saying He is God as God the Father is declaring Him Son and also God. God the Father is saying that the Son is Me. When God speaks forth anything, His speech declares His nature, His nature is His Son, and therefore the inheritance of the name Son is a declaration that He is God and much better than the angels.

The last half of verse 3 and verse 4 of Hebrews 1 reads, “When He had made purification of sins, He sat down at the right hand of the Majesty on high, having become as much better than the angels, as He has inherited a more excellent name than they.” Purification of sins we know this to be the life, death, burial and resurrection of Jesus Christ in order to eliminate the effect of sin for us which is death and give us eternal life. In it we see the display of the nature of God perfectly. We see God’s immense love for the world in Jesus Christ. We see on the cross how He was being crushed by His Fathers wrath but never deviating from displaying God to us. He displayed the name of God perfectly. He loved others and loved His Father even in the darkest times of His life. The Father threw everything at Jesus during that time. We see the physical aspect of the death on the cross at the hands of humans but what we don’t see is the devil and the evil angels throwing all they had at Jesus. I can only imagine what type of temptation He was experiencing while being tortured and hung on a cross. Maybe a stronger temptation than what was in the wilderness. His actions of sweeting blood should give us some type of indication of the pain that He was sensing. The Father gave Him all that He could handle to the point of dying on the cross but He never sinned. He never stopped displaying the nature of God. He couldn’t because the Son is God speaking His character forth. The Son can do nothing independent of the Father because the Son is the Father – John 10:30. The Son could never fail.

After doing so He ascended into the true tabernacle as the God-man which has never in all of eternity happened before. Psalms 24:7 describes what it looked like when Jesus entered into heaven, “Lift up your heads, O gates, and be lifted up, O ancient doors, that the King of glory may come in!” He then sat down at the right hand of God which the author of Hebrews calls the Majesty on high. Sitting at the right hand of a king symbolized a place of authority. When Jesus sat down on the throne, God was declaring His authority. No angel took the throne, only the Son has the right to the throne of God. Only the man who is God can take the throne.

What did this declaration look like? The remainder of chapter one of Hebrews is God declaring the truth of Jesus. Part of that dialogue is in Hebrews 1:8 which reads, “But of the Son He (the Father) says, “Your throne, O God, is forever and ever, And the righteous scepter is the scepter of His kingdom.”

Angels are not to be worshipped. The purpose of angels is to minister to those who will inherit salvation as the writer teaches in verse 14 of chapter 1. They, like us, are being upheld by the word of the Sons power. Angels are created beings as we are, in service to the one who created them, namely Jesus, the Son of God. Let’s worship the Son as God the Father worships the Son. God over all!