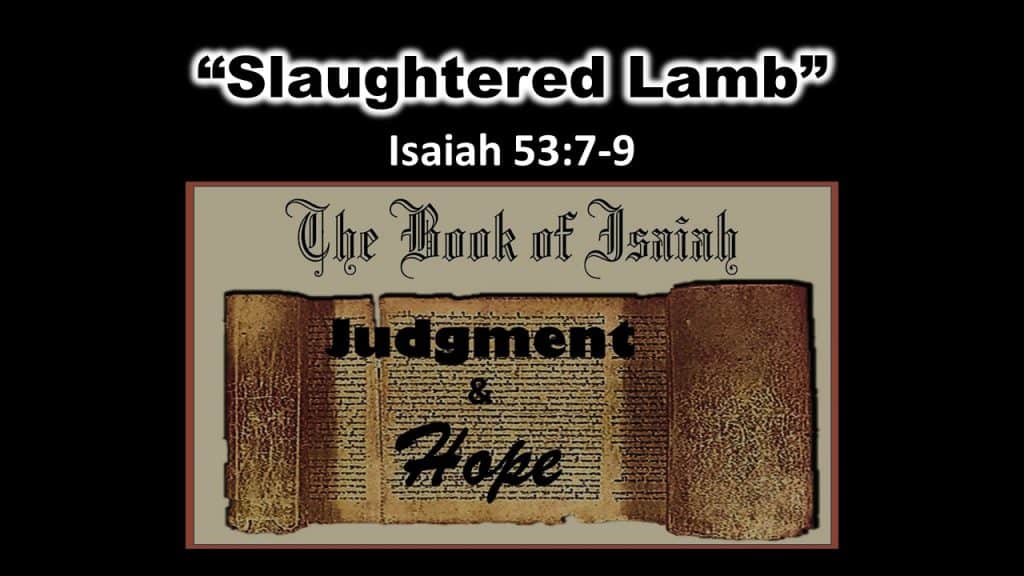 Seven hundred years ago, the prophet Isaiah said the Messiah, the chosen one of Israel, will come and walk among people. Isaiah prophecies that He will serve God to the point of death. He prophecies that the Messiah will come to His people, and will be unrecognized. The Messiah is more than not recognized; He is despised, rejected, and put to death.

God’s people look upon the Messiah’s affliction and believe it to be deserving. They believe it is God who smites him. Isaiah reveals to us the profound truth that the Messiah is slaughtered as a lamb, not because He deserves it, but He takes our affliction upon Himself.

Jesus is Killed – He is Submissive

Isaiah tells us that when the Messiah walks among us, He is afflicted with harsh physical treatment. As He is afflicted, He is oppressed. The oppression is an act of being humbled. He afflicted and humbled.

The metaphor of the sheep continues from the previous stanza. Isaiah describes us as rebellious sheep. We are all like sheep who have gone astray, and we turn to our own way. The Messiah is a stark contrast. He is not turning His own way, but He is setting His face to accomplish the purpose for which He is sent.

Mark’s Gospel tells us that on the road to Jerusalem, Jesus is walking ahead of His disciples. The disciples are amazed that He is leading the way because they know it is a dangerous journey. They are fearful.

Jesus takes the twelve aside and tells them what is going to happen. He says, “Behold, we are going up to Jerusalem, and the Son of Man will be delivered to the chief priests and the scribes; and they will condemn Him to death and will hand Him over to the Gentiles. They will mock Him and spit on Him, and scourge Him and kill Him, and three days later He will rise again.” (Mark 10:32-34)

Jesus is a lamb who is walking to His slaughter. He is doing so knowingly. He knows what lies ahead.

Not only does He walk to the slaughterhouse, but He is silent once He gets there. In Jerusalem, while being accused by the chief priests and elders, He stands quietly and does not answer the accusations. Pilate asks, "Do You not hear how many things they testify against You?” Jesus does not answer even one charge, and the governor is quite amazed. (Matthew 27:12-14)

Why is Jesus silent? Why is the Messiah standing silently as His accusers seek to put Him to death? Who is this Man? This sort of behavior is unheard of.

His silence tells us that something bigger is going on. We can read the Bible and know that the Servant of God sees the bigger picture. He is not in the wrong place at the right time. This is not an event that is spun out of control. The Messiah knows He is exactly where He is supposed to be. He delivers Himself to that place at the right time.

Obeying and fulfilling the will of God is far more important than His dignity, reputation, comfort, and well-being. Jesus lays aside His rights and privileges in the obedience of God.

Jesus Dies – He is Cursed

By oppression and judgment He was taken away;
And as for His generation, who considered
That He was cut off out of the land of the living
For the transgression of my people, to whom the stroke was due? (Isaiah 53:8)

Those who seek to slaughter the Messiah seek more than His death. They seek utter humiliation.

Isaiah asks, who stops for a moment to consider that the Messiah will have no following generations to carry on the family name? Who considers that this man will be childless? He will have no legacy. To not have a child is a great curse in the ancient world. As they are striking Him, no one makes such a consideration.

Who considers that the slaughter of this Man will result that He is cut-off from the land of the living? Is there anyone considering that this mockery of a trial and the resulting punishment will result that this man is put to death? Does anyone care that He will no longer enjoy the company of His family or friends? Does anyone consider that capital punishment is far too extreme?

As they are scourging the Messiah, is there one person who stops to consider that perhaps they are the one who deserves the scourging? As the Messiah is spit upon and mocked, is there one person who stops and thinks about their sin against God and think, this is what I deserve? As the crown of thorns is pressed on the head, and the nails pierce the feet and hands, will anyone look upon the spectacle before them and say to themselves, “The affliction He is enduring is my affliction and the blood that drips to the dirt ought to be my blood?”

Nobody considers that they are the ones deserving to be the objects of such wrath. If we did not have the Bible, we would not make any consideration. Every one of us thinks that we are good. Everyone thinks that our lying tongue is acceptable in this universe. Everyone believes the violence we do to others, the slander we speak, the hurt we deliver, the lust we fulfill, and the coveting we commit is of no consequence.

Without the Bible, nobody thinks for a moment that their rebellion, sin, transgressions, and selfish lust for fame and fortune are worthy of the punishment which Jesus takes. Nobody looks at the cross and considers, that is what I deserve. The only consideration we make is that our sin before a holy God is a trivial matter.

Everyone thinks that the God of the universe, the Creator of all things, the Lord of hosts, and the Holy One of Israel will look at our lives and see innocence and goodness. Everyone believes God owes them air to breathe and food to eat. Everyone expects God to continue to rain on their crops and put an elegant roof over their head. Nobody considers that a life of not worshipping God and giving thanks is quite alright. We all think that we cannot possibly deserve such wrath.

Jesus is Buried – He is Innocent

His grave was assigned with wicked men,
Yet He was with a rich man in His death,
Because He had done no violence,
Nor was there any deceit in His mouth. (Isaiah 53:9)

As they slaughter the Son of God, they not only take no consideration of cutting Him off from the land of the living, they are intent on being sure that His burial is humiliating. They are content to throw His carcass onto the heap of wicked men.

Here is a man who only a few days earlier is being followed as a respected teacher. He lives showing kindness to women and children. He feeds the hungry. He looks upon those who are lepers and heals them of their sickness. He enables the lame to walk, the deaf to hear, and the blind to see.

But, in His burial, His body is not cast among people who are heroes, but they intend His body to be thrown to the waste pit of the town dump. But, God sees to it that His Servant, whose mission is complete, will have a tomb of value.

In the act of Providential fate, God changes the course of human will. God will not have the body of His Servant go missing from the trash heap outside the city gates. God ensures His body is placed in a worthy tomb. When the disciples run to find the body, it will be in a proper tomb. The risen Savior will walk out with dignity. His body might easily be thought of as lost from the rubbish heap. There will be no mistaking that, He is not there!

The Messiah suffers a great injustice. He does no violence. Not once. Not only is He silent before those who afflict Him, but there is also never found to be deceit in His mouth. Not once.

Jesus is the perfect Lamb of God who has no blemish. Our atonement may only come from someone who does not deserve the punishment. In other words, Jesus cannot take our punishment if He also deserves punishment (otherwise, He will have to die twice, once for Himself and once for us). Isaiah rightly prophecies that the atoning sacrifice of the Lamb of God is made with an innocent Lamb without a blemish. He is pure, holy, and righteous.

Worthy is the Lamb who is slain.