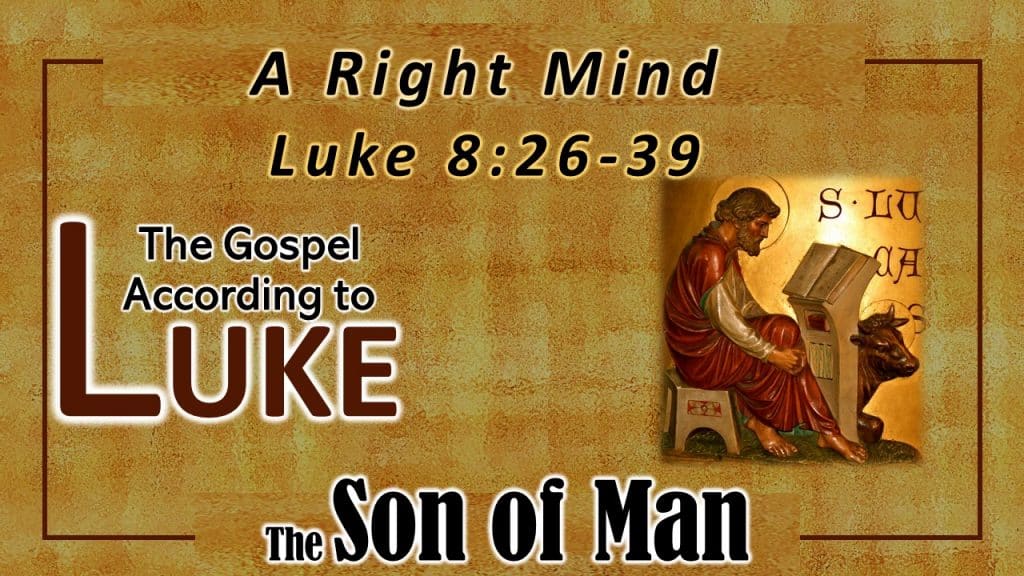 Jesus and His disciples get into a boat on the northern shore of the Sea of Galilee. They journeyed in the night as they head for Gerasenes, a region on the southwest side of the lake.

During the night, a fierce storm threatens the men in the boat. It is life-threatening, and water from the waves starts to fill the boat bringing it to the point of capsizing. The disciples wake Jesus from His sleep and cry for help as they believe they are going to perish. Their life flashes before their eyes.

Jesus rises from His sleep and rebukes the storm. In an instant, the storm dissipates, and the air and the sea become calm. God sends the storm for a reason. God wants the disciples to put their faith in Jesus. The disciples are full of amazement. Jesus is their Savior.

Morning comes, and the boat arrives on the shore Gerasenes. Once again, Jesus will demonstrate great authority. He will prove Himself as the Savior of the world. He will meet a man who is without hope and in desperate need of salvation. He is a man abandoned by society and left in the wilderness while everyone waits for him to forever vanquished. Imagine living a life that nobody wants to be in your presence. His end will be good news for the city of his upbringing.

Jesus came out onto the land, and He is met by a man from the city who was possessed with demons. He must have been a pitiful sight. Imagine getting off a boat after journeying through the night and being met by someone who has no clothing.

The man is tormented day and night with demon possession. He is filled with demons. We may think we have it difficult, but this man is living a horrible life. He has no place to live. He has no home but lives outdoors. Mark’s gospel tells us that this man gashes himself with stones leaving sores on his body (Mark 5:2-5).  If we were to encounter this man, we would hide our eyes and run as far as we could.

The man lives in the tombs. He makes his home in the caves of the dead. It is likely human bones and remains are where he spends his evenings. It is no resting place because he continually screams in the tombs and the mountains.

He possesses supernatural strength. The people of the city try their best to chain him but are without success. Men are sent to guard him to protect the people of the city. But, no man can stop him and no chains can hold him. He breaks them his shackles. Every father and mother tell their children to stay away from where he wanders. He is a fearful sight.

Day and night demons torment him. He hears voices of evil continually taunting him and bringing him great anguish. Perhaps he seeks to die if only to escape the demons who control his thoughts, words, and actions. If ever there as anyone who has no hope, surely it is this man. This man is in control of a powerful enemy. His enemy is Satan.

Satan has stolen this man’s life. He has no vocation. It is likely his family in the city is ridiculed because of him. We wonder where he gets his food. And, he has no home of comfort where he may find rest. He is physically broken. He may have great strength, but what good is his strength if he uses it to take stones and gash his body so it bleeds?

Did you know we have the same enemy as the man in Gerasenes? If you ever wondered what the goal of Satan and his demons is you only need to look upon the man who is living in the tombs. Satan’s work is blatantly visible with this man. Jesus says the enemy comes to steal, kill, and destroy (John 10:10).

Earlier this year I wrote a blog post on demons. You can read it on the church website (link). Satan and his demons ought not to be treated as trivial. If Jesus is not your Savior, you are under their control. You may not be demon-possessed, but the Bible says you live according to their plan. You do not belong to the kingdom of God, but you are a citizen of the kingdom of darkness. Your life is full of fulfilling the lust of the flesh and mind, and you are a child of wrath (Ephesians 2:1-2). But, there is hope. Listen carefully, and you can learn how Jesus can save you from the clutches of darkness.

If Jesus is your Savior, know that the enemy seeks to lead you astray. He has no power over those who are in Christ, but he still seeks to make your life miserable. He wants to steal, kill, and destroy. He loves it when there is no unity in the church. He hates God, and he hates that you love Jesus. Be careful. God’s word says, “Submit to God. Resist the devil and he will flee from you” (James 4:7).

There is hope, and hope has a name. The name for his hope is Jesus. The man in Gerasenes woke up to the best day of his life because Jesus stepped onshore.

The man sees Jesus and falls down before Him. The demon’s cry out in a loud voice, “What business do we have with each other, Jesus, Son of the Most High God? I beg You, do not torment me.”

Demons are spiritual beings. They know Jesus. They have seen Him before. Before they rebel against God, they know Jesus because He created them.

The Bible says, For by Him all things were created, both in the heavens and on earth, visible and invisible, whether thrones or dominions or rulers or authorities—all things have been created through Him and for Him.” (Colossians 1:19)

The demons know Jesus is all-powerful and has all authority. Jesus can speak, and they must obey. Jesus asks, “What is your name?” and the answer He hears is“Legion.” The man is full of a regiment of demons, which is what the name means. A Roman legion consists of thousands of soldiers.

Legion asks Jesus not to cast them into the abyss. The abyss is hell. They will go anywhere, but where they don’t want to go to is the prison of hell. They know their ultimate destiny will be eternal torment in the lake of fire. They are asking for a reprieve from their eventual fate. They see a herd of swine and ask Jesus for permission to enter the swine, and Jesus grants their request. The demons come out of the man and enter the swine, and the herd rushes down the embankment and drown in the Sea of Galilee.

What problem do you face in life? Do you know Jesus has the power to save you? We may not have problems like the demon-possessed man in Gerasenes. It’s most likely that everyone in the city gave up on him. They likely saw him as a lost cause. But, with Jesus, there is nobody who is so far out of His reach that Jesus cannot save. This is an important lesson for us as we look at people on the street and think there is no hope. Jesus can save anyone. With Jesus everyone has hope.

Do you have chains of addiction? Jesus can break your chains. Are you full of anger and rage? Jesus can calm your soul. Are you living in the kingdom of darkness? God is willing to shine the light of Jesus on your heart. Turn to Jesus and be saved. Be like the man in Gerasenes and fall on your face before the King of kings.

Luke tells us what happens after the demons enter the herd of swine, and they run off into the lake. The herdsmen who are watching turn away and tell everyone in the city and the surrounding country what had happened. Apparently, Jesus and His disciples sit waiting on the shore near the boat.

The people are fascinated and want to go see for themselves what happened. They come to Jesus and find the man from who was demon-possessed, sitting at the feet of Jesus. It must be an amazing sight. He sits, clothed, and in his right mind.

We might think they will celebrate. Why don’t they shout with joy? Why are they not wanting to ask Jesus to help them? Instead, they are frightened. Luke tells us they are gripped with great fear. It is a very interesting response.

It seems Jesus brings out very interesting responses in all people. Some, look at Jesus and want to draw close. They want to touch Him and be made well. They want to hear Him teach. In Capernaum, Jesus attracts large crowds. The disciples have to work hard to keep people away.

But, this is not what happens in Gerasenes. We don’t know why, but they ask Jesus to leave. When people are in the presence of great power and holiness, they are convicted. They are awestruck. They tremble in terror because of Jesus' power. They have not seen such holiness. It is more than they can stand. All they know is, the presence of Jesus will change them. He is Lord, and they don’t want Him to be Lord.

Jesus and His disciples get into the boat and head north. They return to where they came.

What about you? Does Jesus frighten you? For many, He does. Perhaps you like the way you live. You are comfortable in your sin. You think your best option is to resist God. You want to be in control of your life and don’t want to bend your knee to God. You prefer rebelling against God’s commands. You resist being under God’s control.

All who fall before Jesus and declare Him to be Lord and Savior no longer find Jesus as someone to fear, but someone to love. Jesus transforms lives and restores dignity. Jesus gives meaning and purpose to life. Jesus will present those who submit to Him before the throne of God as a people with no shame or guilt. They enjoy the presence of God in eternity. Put your faith in Jesus.

Not everyone in Gerasenes wants Jesus to go away. There is one man who is in his right mind. The man from whom is formerly demon-possessed begs Jesus that he may follow Him as a disciple. He knows from personal experience that Jesus is worthy of following.

But, Jesus has other plans for this man. He becomes the first missionary to declare the glory of Jesus. Jesus tells the man to return to his house and describe what great things God has done for him. The man is obedient. Jesus is his Lord and Savior. He hears Jesus declare to him the Great Commission. He went away and does what Jesus asks. He proclaims throughout the whole city what great things Jesus has done for him.

What about you? Do you beg Jesus to follow Him? Are you thankful that He rescues you from the domain of darkness? If you do, you will proclaim throughout your city what great things Jesus has done for you. Obey Jesus and fulfill the Great Commission. Tell everyone how Jesus sets people free. Be like the man who was formerly lost, but is now in his right mind. Give Jesus the glory for the great things He has done for you.