What is Righteousness by Faith? (part one) 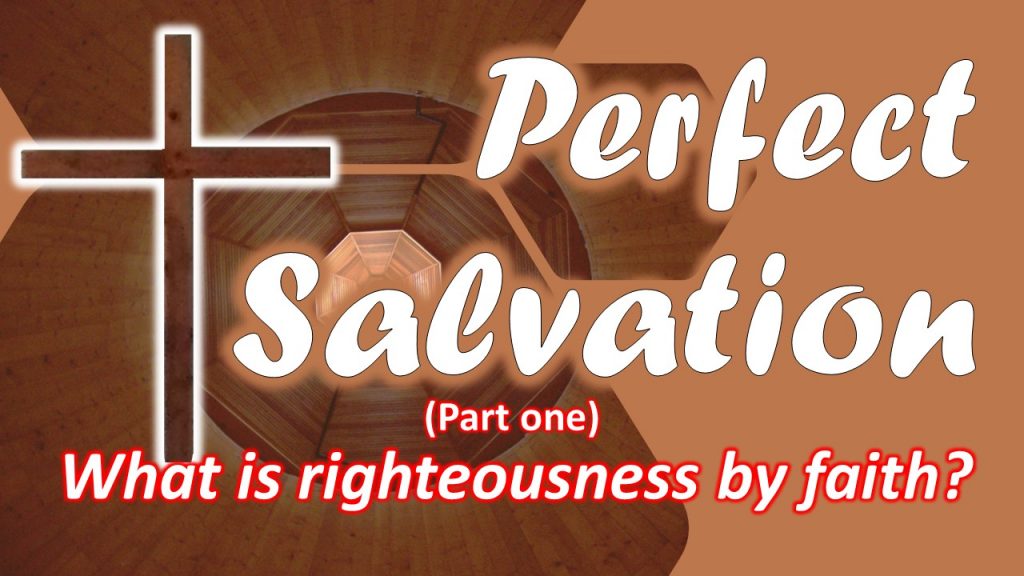 WHAT IS RIGHTEOUSNESS BY FAITH?
Last week we answered the question, “what is salvation.” We concluded that salvation is our rescue from unrighteousness, spiritual deadness, and the impending wrath of God. It was a very weighty message. If you do not know Christ as your Lord and Savior, we pray that last week’s message will instill a fear of God, and you will cry out for mercy before His throne.

The good news is that God desires to be merciful. His desire to save us is far greater and more magnificent than His willingness to pour out His wrath. We know that His willingness to save us is immense because of the extent He goes to offer forgiveness and mercy. God gave His beloved Son to bear the penalty of our sin so that we have a way to become righteous. His offer of mercy and forgiveness is available to every person in every nation.

Let me state it another way. We are fully deserving of God’s wrath because we are unrighteous. But, God the Son, Jesus Christ, became a man. Jesus took our sin upon Himself. God poured out His judgment on Jesus who bore the full wrath that we deserve. God demonstrates His love in a way that is profound and beyond measure.

To be saved, we need righteousness. The goal of the message this morning is to answer the question, “What is righteousness by faith.” (This is the first of three messages.) The main idea is to know that we receive righteousness when we put our faith in Jesus Christ.
Chapter one, two, and three of Romans prove that nobody is good. There are none righteous. If the book of Romans ended there, we would remain miserable, depressed, and without hope.

GOD’S CREDIT OF RIGHTEOUSNESS
Chapter four of Romans begins with asking a question about Abraham. The reason to start with Abraham is that he is the forefather of faith. As we will see later in the message, Abraham is not the father of Judaism, but he is the father of Christianity.

Abraham’s faith credited as righteousness (Romans 4:1-4)
God declares Himself to be the God of Abraham, Isaac, and Jacob. We serve a God who identifies Himself to Abraham. The first four verses of chapter four encourage us to stop and think about Abraham, the great forefather of our religion.

Abraham is a descendant of Adam, like us. Abraham is born spiritually dead. We can read about the sins of Abraham, so we know he lacks righteousness. Just like us, Abraham, the father of Christianity, needs righteousness.

When Abraham interacts with God, what did Abraham find out to be true? We can read about the account of Abraham’s life in the first book of the Torah, Genesis. The Apostle Paul asks the Roman church, what does the Scripture say? In Romans 4:3, Paul quotes Genesis 15:6. The Scripture says, “Abraham believed God, and it was credited to him as righteousness.”

God credits Abraham with righteousness, not because Abraham was a good man, but because Abraham believes what God says will come to pass. At the time, Abraham is fatherless. God promises Abraham that he will be the father of many nations and that his descendants will be as numerous as the stars in the sky.

Abraham is 75 years old, and his wife is also elderly. They are beyond childbearing years. But, because God said it would happen, Abraham believes in God. God fills Abrahams’s empty righteousness bank account because he has faith in what God says.
Abraham does no work to obtain his credit of righteousness. All Abraham does is believe God’s promise to be true.

We have to agree, do we not? We are truly blessed if God will not take our sins into account. We are blessed if we do not have to earn righteousness. We are blessed beyond comprehension if our faith in God’s Word makes us righteous.
Not through the Law (Romans 4:10-15)

Abraham is credited with righteousness before he is circumcised. That means it is not performing the covenant law that makes Abraham righteous, but it is his faith. God makes His covenant with Abraham before circumcision, and before the Law of Moses is given on Mt. Sinai. Abraham’s righteousness is given to Him completely because of Abraham’s faith.

We know the Law brings about wrath because we are spiritually dead. We are born with a sin nature and unable to fulfill the Law. We are guilty. No one does good. It is impossible for us to receive righteousness from doing the good in the Law.

Righteousness is a gift of grace (Romans 4:16a)
The Apostle Paul makes a critical statement in Romans 4:16. Let’s read this statement and take time to pause and be sure this truth hits us not just in our heads but in our hearts.

For this reason it is by faith, in order that it may be in accordance with grace (Romans 4:16)

(pause, let’s read it again)
God grants us righteousness by faith so that the credit is a gift. It is in accordance with grace. We do not deserve to receive righteousness. God grants it even though it is undeserved.

The Apostle John writes this about Jesus.

For of His fullness we have all received, and grace upon grace. For the Law was given through Moses; grace and truth were realized through Jesus Christ. (John 1:16-17)

Paul tells the church in Ephesus:

But God, being rich in mercy, because of His great love with which He loved us, even when we were dead in our transgressions, made us alive together with Christ (by grace you have been saved) (Ephesians 2:4-5)

It is God’s intent from the beginning of time to save people by grace. Grace is unmerited favor. Grace is never deserved. We can never earn grace; otherwise, it would not be grace but something owed.

We do not earn grace by baptism, going to church on holy days, abstaining from certain foods, giving money to the poor, or by reading the Bible every day. Grace is not earned, it is a gift given by faith.

God’s righteousness is a gift for all the nations (Romans 4:16b-22)

God offers the free gift of righteousness to all the nations. Paul reminds us (Romans 4:17), that God promises Abraham is the father of many nations, quoting Genesis 17:4-6. Abraham believes God, in hope against hope.

In other words, Abraham had little hope from a physical standpoint of being a father of many nations. He and Sarah were well beyond childbearing years. Abraham considers his childbearing years as over and dead. But, Abraham knows God can perform miracles. Abraham’s faith is in God’s doing what He says He will do. He believes God fulfills His promises. Abraham’s hope and faith is in God, not in the physical world circumstances. Abraham’s belief in God promise is credited to Him as righteousness.

Even so Abraham BELIEVED GOD, AND IT WAS RECKONED TO HIM AS RIGHTEOUSNESS. Therefore, be sure that it is those who are of faith who are sons of Abraham. The Scripture, foreseeing that God would justify the Gentiles by faith, preached the Gospel beforehand to Abraham, saying, “ALL THE NATIONS WILL BE BLESSED IN YOU.” So then those who are of faith are blessed with Abraham, the believer. (Galatians 3:6-9)

1) Just like Abraham, all who put their faith in God are credited with God’s righteousness.
2) God’s credit of righteousness is available as a gift of His grace to people of every nation, tongue, and tribe.

Lastly, we come to the essential part of understanding righteousness by faith: the person and work of Jesus Christ.

We put our faith in God to grant us righteousness when we look upon God’s display of righteousness on the cross.
Let’s read again the last few verses of Romans chapter four.

Now not for his sake only was it written that it was credited to him, but for our sake also, to whom it will be credited, as those who believe in Him who raised Jesus our Lord from the dead, He who was delivered over because of our transgressions, and was raised because of our justification. (Romans 4:23-25)

These verses are among the most important verses in the Bible. The Apostle Paul declares that the truth in the book of Genesis applies to us. The truth that Abraham believes God and it is credited to Him as righteousness is for Abraham as well as for us.

God’s display of righteousness is seen in the person and work of Jesus Christ as He demonstrates the glory of God upon the cross.
We see the demonstration of Christ’s perfect righteousness. Jesus is innocent. He never sins. Yet, He obeys God by fulfilling God’s commands of going to the cross to take a punishment He does not deserve. Jesus prays to God, not My will, but Yours. Jesus glorifies God by being obedient to the point of death. God is glorified by the perfect obedience of Jesus, God the Son.

We see the demonstration of God’s glory of righteousness in the punishment of sin. God demonstrates His righteousness in punishing sin. Jesus is delivered to the cross to be our sin-bearer. He takes upon Himself the full wrath of God on the cross. On the cross, we see God’s perfect righteous judgment.

We see the demonstration of God’s promise of salvation when God raises Jesus from the dead. The resurrection of Jesus Christ from the dead is the proof of salvation unto eternal life. The resurrection is the paramount truth of the Gospel. It proves that when we put our faith in Jesus as our sin-bearer, we receive eternal life. Jesus took our sins to the cross, and He buried our sins once and for all in the grave. Death and the grave are not final.

All the promises of God find their yes, their fulfillment in Christ. The promise in the Garden to give a Savior, to Abraham to be a father of many nations, to David that his descendant will sit on an eternal throne, and so forth. Jesus fulfills every promise that God makes.
All who put their faith in Jesus Christ, that Jesus is God in the flesh, and that Jesus died on the cross and rose again for our salvation, receive righteousness by faith.

If you are listening to this sermon, you too may receive righteousness and salvation by putting your faith in Jesus Christ as Lord and Savior. The promises of God may be yours by faith.

If you have put your faith in Jesus Christ, rejoice! We inherit all the promises of God. We are together alive, risen, and seated with Jesus in the heavenly places. God declares us to be His adopted sons and daughters. We are joined together with Christ in a glorious union.
We live in this fallen world today, but in Christ, we overwhelmingly conquer all of the challenges and difficulties of life. There is a day when we will stand with God, with no sin, altogether righteous and holy. There is, therefore, now no condemnation for those who are in Christ Jesus.

As the Apostle Paul says at the end of chapter eight of Romans,

For I am convinced that neither death, nor life, nor angels, nor principalities, nor things present, nor things to come, nor powers, nor height, nor depth, nor any other created thing, will be able to separate us from the love of God, which is in Christ Jesus our Lord. (Romans 8:38-39)