Living as Royalty – an allegory of Christianity 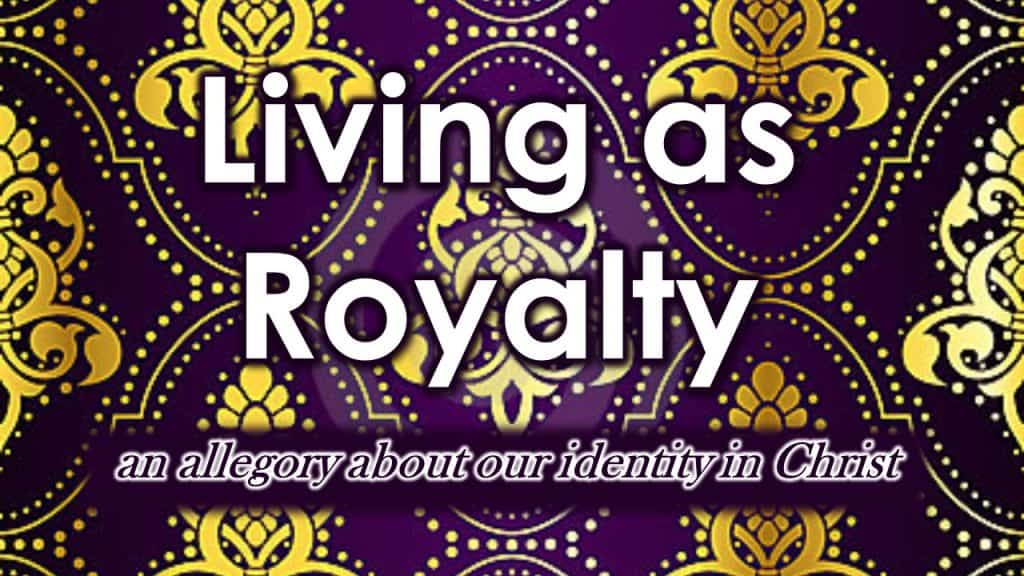 The following is an allegory about the Christian life. It is titled, “Living as Royalty.” It is an attempt to tell the story of our salvation using a different approach and different words.

The Kingdom of Mundane

Life goes on in the Kingdom of Mundane. We are citizens going about our day-to-day routines. Work here. Play there. Go home. Visit a friend. Work. Buy food and clothing. Repeat.

The ruler of the Kingdom of Mundane is King Usurper. Under his rule, the goal of survival is to look out for oneself. Some common sayings are, “to each his own,” “it’s a dog eat dog world,” or, “I’m taking care of number one.”

What is the purpose of living? Are we alive to accumulate things? Is the purpose to live as comfortable as possible? Is life in Mundane all there is? There has to be more?

What makes the Kingdom of Mundane so gloomy is the sickness. Some people are healthy, but that is not the norm. Most people struggle with illness, aches, pains, and weakness. I am tired of hospitals. I am tired of medications. I am tired of seeing friends become sick.

In the Kingdom of Mundane, life always results in death. Everyone dies. The tragedy of Mundane is the death of the young. Some live long. Many do not.

The reality of death is depressing. Death is like a dark cloud hanging over our existence. We don’t like to talk about death, but we are forced to every time it enters into our little world of existence. Many people find an escape to avoid thinking about inevitable death. Common forms of escape include entertainment, alcohol and drugs, sex, and vacations. The problem is the escape is temporary while the reality of inescapable death always remains.

A Visit From an Ambassador

Not everyone in Mundane is gloomy or trying to escape the reality of death. There are individuals that call themselves ambassadors. If you talk to an ambassador, you will find they are not afraid of death. I’ve even heard them say, “dying is gain.”

Ambassadors have a way of seeking one another out, and they spend a lot of time with one another. They are what some people say, happy go lucky. No matter what happens to them, they are not bothered. They always look like they are singing a happy song and enjoying one another.

I’ve talked to a few ambassadors over the years. They are generally very nice. What I noticed the most is that they didn’t have the same priorities. The ones I knew growing up were unwilling to do some of the things I liked to do. They were not troublemakers, but the peaceful ones. They stayed away from parties. They frowned upon those who cheat or tell lies. One thing that seemed clear to me, it may not be true, it is difficult to be an ambassador and be successful in Mundane.

The reason to talk about ambassadors is that one day, an ambassador spoke to me and my life changed forever. As they say, he rocked my world. I knew the ambassador from work. We were talking about life in Mundane, and one thing led to another.

The ambassador began talking about another kingdom with another king. The name of the other King is Lawful Judge. He lives in the Kingdom of Delight. The ambassador said that King Usurper of Mundane is a make-believe king. Lawful Judge is the one true king. He is the King over all kingdoms.

How can that be?

The Ambassador sadly looked me in the eye and said that the great tragedy is that the people in Mundane follow King Usurper and believe his lies. They don’t know that they can know and enjoy King Lawful Judge. The people of the Kingdom of Mundane do not know about the Kingdom of Delight.  He said that he, and other ambassadors like him, are helping people know the truth.

I remember meeting people in my past who spoke of King Lawful Judge and the Kingdom of Delight. How could there be more than the Kingdom of Mundane? I made fun of them and thought them to be crazy. But, this time was different. My gut ached with the words he spoke. What he was saying was speaking to my heart. I wanted to hear more, and I asked him to continue.

Ambassador looked me in the eye, perhaps knowing my guilt, and said, “those who fail to love and pay homage to the Lawful Judge are condemned forever. Their fate is sealed. There is life after Mundane. The guilty receive their punishment after they die in Mundane and enter into the next life.

The ambassador continued, “Nothing escapes the notice of the Lawful Judge. He sees and knows all about every creature and every person. There is no escaping from His watchful eye. Every citizen in the Kingdom of Mundane is guilty and must face punishment.”

My heart sank. That’s me. My life is not characterized as obeying the law of love. I pretended I didn’t believe in the existence of King Lawful Judge.  I thought his existence and the Kingdom of Delight was an old-fashioned fairy tale. Reality hit me in the face. My life in Mundane was the least of my worries. My greatest concern became my next life after dying in Mundane. My mind was reeling. “Ambassador,” I said, “is there any way of escaping the punishment?”

“Yes, there is. Listen carefully.”

It was then that the Ambassador told me how I might escape from the punishment of eternal condemnation. He began telling me more about King Lawful Judge.

For those who are citizens in the Kingdom of Mundane, the King is known as the Lawful Judge. But, to those with blinders removed, who see the truth of His existence and are willing to bend their knee to Him as king, He is affectionately known as King Good Father.

Is the Good Father a different King?” I asked. “No. They are the same king. What I am saying is that to some, the King of Delight is only the Lawful Judge. This is who they know Him to be. But, to those who obey Him, He is not a Judge, but a Good Father.” Replied the ambassador.

The ambassador said that King Good Father rules with two others, the Emissary and the Captain. They love one another. They each have responsibilities that they fulfill. These three are in perfect unity. They are three, but they are one.

The Emissary is the one who sends out ambassadors to the people of Mundane. The Emissary communicates with people everything regarding the Kingdom of Delight. The Emissary has given the ambassadors a book and the book is called the Book of Royalty. Everything we need to know is written in this book. It contains information about the Good Father. It tells us of how that throughout history, the Good Father has shown His love for people in the Kingdom of Mundane.

But, the main reason the Captain came to the Kingdom of Mundane was not to teach and gather followers. The mission of the Captain was to demonstrate an extraordinary act of love. He came to save people from the punishment they deserve for breaking the laws put forth by King Lawful Judge. The Captain took the punishment upon Himself. He suffered, and He died.

I was excited to hear this news! I asked, are you saying that the Captain took the punishment for everyone in the Kingdom of Mundane? The ambassador replied, “No. The punishment is available as a gift, and it must be received as a gift.”

“How then do I receive this gift?”, I asked.

“I believe.” After saying that I believe, an overwhelming peace and comfort flooded my being. The ambassador and I were crying and laughing at the same time. I remember it as the most significant moment in my life.

Transformation to Royalty – A New Identity

The ambassador said that he knew that the Emissary had opened my eyes. He said, “I can tell you now see. I know this because you demonstrate a desire for the Captain. You’ve fallen in love with Him haven’t you?”

The ambassador went on to tell me about an astonishing transformation taking place in me. He told me that the Emissary is now living in me. I am not who I used to be. The Emissary is now my guide to help me live a life that is pleasing to the Good Father.

What I found to be the most comforting is the transformation of my identity. My belief in the truth about the Captain makes me a different person. The Captain is more than my Savior, but He is my Husband, and I am His bride. We are not married in the same sense as marriage in Mundane. Instead, our marriage is that of being joined together in unity. I am His and He is mine. We become one. All that is His is mine, including His nature. This union is shared by all ambassadors.

Let me share the truth of our transformation. The King of the Kingdom of Delight came over and chose us to be joined to his son in unity. Being one with the Royal Prince, we become royalty. We are not royal subjects, but royal family. It doesn’t matter what people in Mundane think of us, what matters is who we are in the Kingdom of Delight. We are royalty with all the rights and privileges of royalty. All that belongs to the prince belongs to us. We have a new name because we are adopted into the royal family. One day, the prince will come and take all of us who are joined together with Him to live in His Kingdom.

The Book of Royalty

All the misery and pain of Mundane is temporary. I am not poor, but I am rich because I belong to the Captain. I have a great future and great hope. Now I understand why ambassadors are not bothered by the events and circumstances of the Kingdom of Mundane. Now I understand why they get together and talk about the Captain, the Emissary, and the Good Father. I share in their joy.

I read the Book of Royalty because it helps me think rightly about my life in Mundane. It gives me hope. It helps me to know how to live like a royal citizen and how I may please the Captain and show him how thankful I am for saving me and giving me hope.

As an ambassador, I enjoy getting together with other ambassadors. When we get together, we sing about the Captain and the Good Father. We talk to the Good Father, and He hears us. We express our thanksgiving. And, we help encourage one another to press on. When we get sick or when bad things happen, we remind one another, that the story is not over. We have a future. Our identity is not a citizen of Mundane, but our identity is that we are joined together with the Captain.

Sometimes we fail at living as citizens of Delight. Sometimes we act as citizens of Mundane and become self-centered instead of loving. When we do, we remind one another that the Captain’s work is complete. He is victorious. He told us we would fail, but we need to keep trying. Our belief is not in what we do, but in what the Captain did for us. The adoption may not be reversed. The salvation may not be taken away. The marriage is secure and a promise.

Ambassadors are a people of hope.